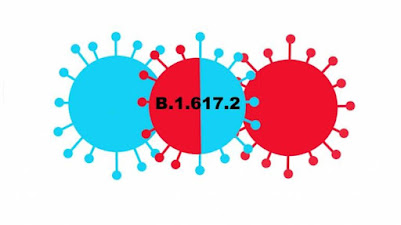 COVID-19 seems like a monster with endless heads, if one gets beheaded, another head comes out to fight.

Delta plus is the latest in a long line of novel mutant variants of the Delta Covid-19 strain, which was initially discovered in India. While the previous form was mainly blamed for the Covid-19 pandemic’s second wave in India, the new, more virulent variety is being feared ahead of a possible third wave.

Here’s what the public health specialists are talking about now that the Delta plus Covid-19 version has been identified in as many as 11 nations.

What is Delta Plus Variant?

Delta Plus (B.1.617.2.1/(AY.1) is a novel variation of the SARS-CoV-2 coronavirus that resulted from a mutation in the virus’s Delta strain (B.1.617.2 variant). Because it is still a novel mutant strain, nothing is known about its severity or antibody resistance. According to some studies, the Delta plus (AY.1) is resistant to a monoclonal antibody cocktail, but additional study is needed.

How dangerous is the ‘Delta Plus’ version of Covid-19?

In addition, one of the Delta plus mutant strain’s developing variations has acquired the K417N mutation, which is prevalent in Beta variants in South Africa. Some experts believe that the mutation, when paired with other characteristics of the Delta variation, might make it more transmissible, although further research is needed to confirm this theory.

Vaccine efficacy against ‘Delta Plus’ strains

The novel mutant version may be able to avoid immunity resulting from both Covid-19 vaccinations and previous infections. This is because the Delta plus variation has all of the symptoms of the original Delta variant, as well as those from its companion Beta variant (K417N mutation).

We already know that the Beta version evades Covid-19 vaccinations far better than the Alpha or Delta variants, as proven by the fact that a shipment of AstraZeneca vaccines was returned by the South African government.

What the Modi Government has to say on this?

The central government has cited research claiming that the Covishield and Covaxin are ‘broadly effective’ on the Delta plus type. To fully assess the arguments on both sides, further research is needed in this field.

Cases in India:
Around 48 cases of the Delta plus variation have been found in Maharashtra (20), Tamil Nadu (9), Gujarat (7), Kerala, and Gujarat (2) while Andhra Pradesh, Odisha, Karnataka, Rajasthan and Jammu have reported one case each. However, no deaths have been reported in India or the United Kingdom as a result of the new variety. The first five cases were sequenced on April 26 in the United Kingdom, and they were contacts of people who had travelled from or transited via Nepal and Turkey.

The mutation may not cause a third wave in India – it depends on Covid-appropriate behaviour as well – but it might be one of the factors.

Previous post Peter Pan Syndrome led to Assaulter’s Bail from POSCO Act
Next post Feeling low? Here’s What to Do to Elevate your Mood