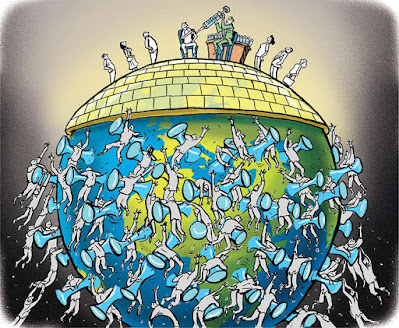 India, a developing country where people are busy dissing PM Modi and states for the mismanagement of vaccines that led to the wastage and shortage. People forget that powerful country like India can at least buy from other countries but what about economically poor and geographically small countries?

Only 2.1 per cent of Africans have received one dose and here in India, people even after receiving two doses are not quite happy with the vaccine. So, to stop the Vaccination Apartheid (rich countries with a huge amount of vaccines, poor countries with not enough), we need to stop the vaccination gap between advanced economies and developing countries. This is a step towards everyone’s interest and moral right.

The countries are facing the same threat with thousands of people dying every day and getting them all vaccinated is not possible till 2023. Every day several mutations are taking over the world and the way to fight them is via vaccines.

To stop such things from happening, European Union (EU) has proposed a $50 billion plan to vaccinate 40 per cent of the world population and 60 per cent by mid-2022. The idea of tying vaccination availability to political objectives and vaccine nationalism has been rejected by the EU.

EU has exported 240 million doses to 90 countries so far. EU with its member states called ‘Team Europe’ is aiming at donating at least 100 million more doses to low and middle-income countries by 2021 end. Around 1/3 of all COVAX, the delivered doses have been financed by the EU.

Africa imports 99 per cent of Vaccines. So, the EU backed an initiative funding to boost manufacturing capacity in Africa for medicines, vaccines and health technologies.

It would be “vaccine apartheid” if wealthy countries hoarded COVID-19 vaccines while millions in poor countries died waiting for them.

“It’s about reaffirming our commitment to the advancement of equality and human rights, not only in our own country but around the world,” says South African President Cyril Ramaphosa.

South Africa and India have been lobbying the World Trade Organization for a waiver on some Intellectual Property (IP) rights for vaccines and medicines. Recently, US President Joe Biden endorsed the concept.

The big problem is a lack of sharing. So the solution is more sharing, as per WHO.

Vaccination rates in the richest countries and areas are more than 30 times higher than in the poorest. This vaccination disparity is not just unjust; it also poses a threat to everyone.

Previous post Conjuring 3 Review – Love Conquers All, Gripping Suspense and Totem Witch
Next post Centre to Provide Free COVID-19 Vaccines To All, Here are my Thoughts!